All of us at LGBT Fresno miss seeing, interacting and supporting you during this challenging time.

We will resume support and social services just as soon as it is safe to do so. We are still for you via social media, email and text/phone.

Several resources we hope you will utilize until physical distancing is over are: -Download the Zoom app (it's FREE!) on your phone or computer
-Enter the meeting code located on the flyer or here: 937 458 8733 (AA meeting only code is 284 131 529)
-Familiarize yourself with the platform before hopping on the call, specifically where the mute button is located
-You do NOT have to share your video if you don't want to Most of us hope, in whatever small way, we will have contributed to a better world by the time we leave it. Before Fresno resident and human rights activist Todd N. Nelson passed away, he decided to leave a legacy for the causes he cared about most. At a time when the burden of illness would consume many, Todd was considering how he could improve life for others.

Four years ago, after his father died in 2016, Todd realized his home and his health were deteriorating. He reached out for help from his aunt Joyce Rosenwald and her partner Jan Bateman who live in Corvallis, Oregon. The couple helped to arrange health care and assure Todd's home was livable.

They provided him with emotional support and acceptance through his most challenging moments, then agreed to guide him through the process of creating a will and trust. Todd became interested in establishing a trust that would include donations to the organizations he valued. Due to his disabilities, Todd had been on a fixed income for most of his life, limiting the funds he could offer charities. However, after his father passed away, he was left with an inheritance to share.

Todd's desire to leave a legacy became more urgent as his health declined. On March 27, 2017, with the assistance of an attorney, Todd established a trust that would allocate 10 percent of his estate to the LGBT Community Network (the non profit that encompasses LGBT Fresno) and 10 percent to the Human Rights Campaign. This unexpected, comparatively large donation came from an individual who grew up with many challenges.

A life-long resident of Fresno, Todd was born in 1968. From birth, he was profoundly hard-of-hearing. He was adopted as a one-year-old by Roger and Joni (Joyce's sister) Nelson. His parents divorced, and his mother died when he was 14. Todd struggled with recurrent depression and social isolation throughout his life. In early adulthood, a diabetes diagnosis became an increasingly severe problem.

Joyce remembers Todd as a "sweet, shy child." She believes that his sexual orientation presented further obstacles to his connections with others. Coming out and engaging in LGBT causes was a gradual process for Todd. The internet became a welcome tool, allowing him to learn about and connect with human rights issues.

Eventually, he reached a point where he was comfortable with his identity and wanted others to be as well. "He wasn't very public, to begin with," Joyce stated, "but more recently, he was proud of being gay." Given Todd's limited connections with LGBT people, Joyce and Jan were undeniably beacons of courage for him. He could count on them to look out for him as they looked out for themselves.

Joyce and Jan met while both were teachers in Albany, Oregon. They became casual friends and often participated in the same community softball and teachers' bowling leagues. One day they realized that they had found soul mates in each other. In May 2014, after three decades together, Joyce and Jan were legally married on Kauai in a small family ceremony. Why did it take so long?

Laughing, Joyce recalled, "Jan kept asking 'Will you marry me' and I always responded, 'Why ruin a good thing.'" Oregon legalized same-sex marriage that month, so their timing was impeccable. The two are enjoying their home, retirement, traveling, attending sports events, and a relationship that has not been ruined by their marriage.

They are also missing their nephew. Todd passed away on March 4, 2019. He was buried at the Chapel of the Light in Fresno, where both of his parents are interred. Todd requested this as his final resting place so the family would be, in his words, "together again." He is buried in the rose garden next to his dad. "We are missing Todd, but we don't miss his suffering. The last three years were very hard for him," Jan said.

While reflecting on this time in Todd's and their lives, Joyce and Jan said they would be eternally grateful for the kindness, generosity, and expertise of countless Fresno residents. The couple explained that caregiver Brandon Stephens, lifelong friend Nancy Richardson, realtor Carmela Nyberg, and attorneys Ruth Lind and Stefanie Krause, provided incredible support.
The legacy donation provided comfort, as well. Todd felt pride in knowing that part of his estate would continue to ensure others might not have to wait a lifetime to feel a sense of hope. "I think he would like to be remembered as a gay man supportive of all gay rights," said Joyce. Jan added, "He was very concerned about human rights. He just felt that rights were rights, and all people should be taken care of."

Any donations offered in Todd's memory should be made to LGBT Community Network and the Human Rights Campaign.
For more information on leaving a legacy donation in your name, please This email address is being protected from spambots. You need JavaScript enabled to view it..

#GivingTuesday is Tuesday, Dec. 3! Can you help LGBT Fresno meet its goal of raising $1,500? It will help pay for support and social services, referral services, events and more that are desperately needed for the most vulnerable LGBT+ community in the Central Valley. Each year we help to fight oppression and lift community members out of social isolation. On Tuesday, Dec. 3, Facebook will match all #GivingTuesday donations you receive, doubling your efforts! Ask your Facebook friends to help you raise a relatively small amount, such as $200; if many of our supporters start Facebook fundraisers, we will reach our goal! 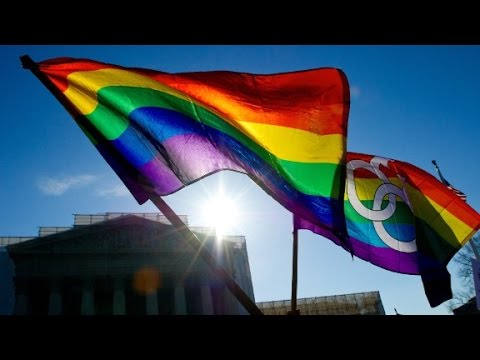 In June 2015 The Supreme Court of the United States declared same-sex marriage legal in all 50 states.

The legalization of gay marriage granted over 1100 statutory provisions to same-sex couples, many of them granting rights and privileges previously only afforded to heterosexual couples.

However, the law didn't just benefit same-sex couples who want to get married, it also had a dramatic affect on LGBT youth. Throughout the history of the United States; there have been landmark cases that have changed the nation. Famous cases such as Brown v Board of Education (1954) and Roe v Wade have dealt with segregation and abortion. Now, in 2019, there will be three cases that deal with LGBTQ rights; cases that can change the nation once again.
On Oct. 8, the Supreme Court will hear three cases that will determine whether the rights of the LGBTQ community will be protected under discrimination laws, and whether these laws protect them from discrimination in their workplace; which will set a precedent for the future. The first one has to do with Aimee Stephens and transgender rights.

Since 2008, Stephens had been trying to figure out her true self and trying to piece it all together. In 2012 she finally made the transition and started confiding into people about who she really was. It wouldn’t be until 2013 when she would tell her boss at R.G and G.R Harris Funeral Homes, a place where she worked as a funeral home director for six years. Stephens gave her boss a letter explaining her experience and her difficulties coming to terms with who she is and explained that she would be adhering to the women’s dress code from now on. Two weeks later, Stephens was terminated.
Stephens argues that federal sex discrimination laws should protect LGBTQ people as well, and on Oct. 8, the Supreme Court will decide if the rights of transgender
individuals are protected under Title VII of the Civil Rights Act of 1964. The Supreme Court will also decide if sexual orientation is also protected under these federal laws by hearing two other cases.

Donald Zarda and Gerald Bostock both claim they were fired from their respective workplace after coming out as gay. Zarda was a skydiving instructor who worked for Altitude Express until 2010 when he was abruptly fired. The incident that ignited the whole thing was when Zarda told a customer his sexual orientation to sooth her concerns of being strapped to a guy; he was fired shortly after that. Altitude Express claims that Zarda touched the customer inappropriately, but Zarda’s team denies these allegations and says Zarda was fired for his sexual orientation. Zarda sued his former workplace, and in 2018 the Court of Appeals for the Second District agreed that sexual orientation is protected under Title VII of the Civil Rights Act of 1964. Unfortunately,
Zarda would not hear this ruling as he passed away in 2014. Altitude Express later petitioned for the Supreme Court to review this case and was successful.

The Supreme Court will also hear the case of Gerald Bostock. Bostock worked for the Clayton County in Georgia. He was part of their Court Appointed Special Advocates program until 2013 when he was fired; Bostock claims it was because he was gay. He alleges that his workplace found out after he joined a gay softball league, and he also claims that some of his former coworkers made negative comments on his sexual orientation. The county has vehemently denied firing Bostock for his sexual orientation. Bostock sued the county but hasn’t been successful, thus bringing his case to the eyes of the Supreme Court.

The Supreme Court will hear these three cases on Oct. 8 and will finally set a precedent on whether the LGBTQ community is protected under Title VII of the Civil
Rights Act of 1964 from discrimination in the workplace.