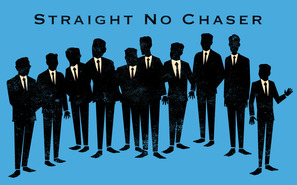 WITH SOME OF POP’S ALL-TIME BIGGEST STARS,

GROUP TO HERALD ALBUM RELEASE WITH SPECIAL PERFORMANCE ON SOUTHWEST AIRLINES ‘PORCH’ AT BRYANT PARK, AN APPEARANCE ON BRAVO’S “WATCH WHAT HAPPENS LIVE,” AND A
MOTHER’S DAY PERFORMANCE ON “TODAY, WEEKEND EDITION”;

“UNDER THE INFLUENCE” ARRIVES EVERYWHERE NOW

Atlantic Records recording group Straight No Chaser has announced details of their upcoming “Under The Influence North American Tour.” The dates celebrate the upcoming release of the acclaimed a cappella group’s eagerly awaited new album, “UNDER THE INFLUENCE,” set to arrive in stores and at all DSPs on Now.

The “Under The Influence North American Tour” gets underway on October 16th in Columbia, MO, and then continues through December 31st, culminating with seven shows in five days in their home state of Indiana, including four closing shows in two days at the Murat Theatre in Indianapolis. For up to the minute news and tour information, please visit www.sncmusic.com/tour.

“UNDER THE INFLUENCE” sees the acclaimed a cappella group reimagining a selection of their all time favorite songs alongside many of the superstar artists and undisputed music icons that made them famous. Produced by Mark Kibble – a founding member of the legendary a cappella group Take 6 and one of Straight No Chaser’s primary influences – the album includes unprecedented collaborations with some of popular music’s best and brightest – including Phil Collins, Stevie Wonder, Elton John, Dolly Parton, Rob Thomas, Seal, and Jason Mraz – as Straight No Chaser put their distinctive and inimitable spin on songs known and loved the world over.

events can be found at www.sncmusic.com/tour.

“UNDER THE INFLUENCE” is heralded by the new single, “I Want You Back” featuring Sara Bareilles. A companion video for the inventive take on the Jackson 5 classic – as well audio clips for an array of additional album tracks – are streaming now at the official Straight No Chaser YouTube channel, located at www.youtube.com/sncmusic.

Fans can pre-order “UNDER THE INFLUENCE” now in a variety of bundles featuring such exclusive extras as an SNC Tour Journal, a refrigerator magnet, and a limited edition 18”x24” screenprinted poster. As if that weren’t enough, the album is also being offered as a special Fan Edition, featuring six bonus tracks, an expanded booklet and deluxe packaging not available with the standard CD. All pre-orders will receive a full album stream one week before release as well as an instant MP3 download of “I Want You Back” (feat. Sara Bareilles). For more, please visitstore.sncmusic.com.

The group will also travel to The Pearl Theatre at The Palms Casino in Las Vegas for four shows in three days, September 26 to September 28. The weekend residency will offer fans the chance to come together for three days of concerts and special events as a part of “The Chaser Summit.” Packages including tickets to all four concert events and three nights of hotels at the Palms Resort will be available through Ticketmaster. “The Summit” concert events will offer fans the first opportunity to preview the music that will be featured in the Under The Influence tour.

The upcoming dates mark a milestone for Straight No Chaser as they feature the return of founding member Steve Morgan, who rejoins the group after the departure late last year of Ryan Ahlwardt. Fans can meet the newest/oldest member of SNC at Straight No Chaser’s official YouTube channel, www.youtube.com/sncmusic.